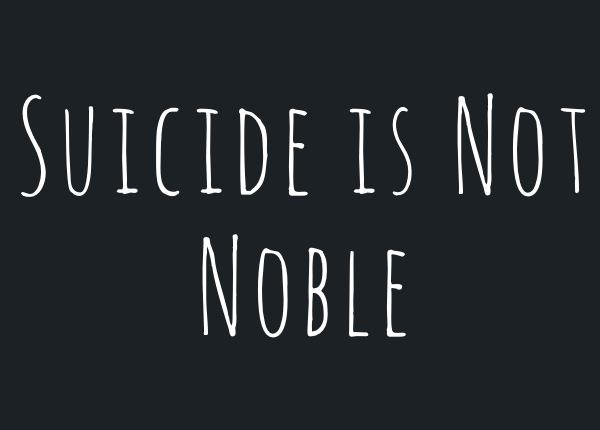 Another pastor commits suicide. It happens. It is deeply sad. It has happened before. One of my pastors growing up committed suicide a decade ago. It was painful for our community and even more so for his family. Sadly, pastors along with other men and women will commit suicide in the future. Until the king returns, the shadow sometimes wins. What is troubling is that in the public conversations now, somehow, the pastors who dealt with mental illness and committed suicide are represented as examples of Christian maturity. Their deaths are framed in phrases like, “now they are whole” or “they fought the good fight” or “they taught us a lot”. These pastors are presented in the light of nobility.

They are not noble.

They stumbled during the race and did not finish well.

They failed their families and their witness of Christ.

They dropped the baton for those they leave behind.

We should be merciful to those who deal with mental illness; I have written about that here. Our best theological, psychological and medical understanding of mental illness is that it is a mixture of biological disorder, a dysfunctional inner life, a spiritual reality and human choice. It is a result of the fall and God has allowed it for his purposes. It is but one more crack in the human soul. Those who struggle with it must steward it as a, “thorn in the flesh”. Like Paul, we should seek and expect God to remove it. If he does not, “his power will be made perfect in our weakness”. If the thorn remains, we should use all means at our disposal to walk well. This includes counselors, pastors and medical doctors. The measure of whether something is working or not is does this path of healing enable me to love well. If so, embrace it. If not, find the path that does.

Like Paul, a thorn of the flesh does not disqualify anyone from ministry. In the same way that a person dealing with same-sex attraction is not disqualified from ministry if he or she stewards their thorn well—staying in the place of temptation and pain. Here, it is a cross to bear not a disqualification. But the thorn is dangerous; it has poison on it. It is not good. There is nothing noble in and of itself. Stick a rose thorn in your foot, put on your shoe and go for a run. You will instantly understand and agree with me. If we can get rid of it, we will.

The nobility of the thorn is not the poison or pain of the thorn. It is the grace of God that mixes with the poison and pain, and somehow makes sweet medicine out of what would otherwise destroy us. In this most basic work of grace is the human will. In this cultural moment where the pendulum has swung from puritanical moralism to the “disease framework” for all that ails us, there is a deep misunderstanding of the human will.

Our dark affections and mental fractures do not, except in those who “lose their mind”, overtake the human capacity of choice. Choice is the internal decision to do one thing over another based upon a variety of factors—emotional, situational, biological, relational, spiritual and most importantly, what we want. It is the ability to choose that makes us noble or not. Christian maturity is the ability to be amid the storm and choose him. It is the ability to cling to Christ when the mind is filled with death, our emotions are dreadful, our biological levels of dopamine and endorphins have fallen through the basement floor, and our relationships are more razor blades than bosoms of love. Grace enables such a life. This is one of its primary works! If a Christian chooses suicide, no one and nothing made them do it. They chose it instead of standing in grace. They committed murder. It is not noble. It is sin.

The person who kills himself takes all his internal pain that is his cross to bear and disperses it on every person he says he loves. He might be at peace, but his family and friends now enter his hell. Except by the grace of God, the children and spouse will be broken for life. Except by the grace of God, his flock will be scattered. There is never a reason that suicide is an option to relieve pain. Christian leaders must not make it look beautiful. The person who has done it has failed in their race.

Suicide is not the unpardonable sin. Of course, his love is enough to envelop the one who commits suicide into the bosom of his grace. But it is despite the horrific act not because of it.

One more thought. The response to such an essay from some will be, “Ron, you could never understand what such a person was dealing with and that this is coarse and unfeeling”. It is true that I do not know. I don’t write this to be mean. It is written not to condemn the dead but to pastor the living. My office is filled with meetings with the suffering and broken. These ones, praise God, choose life despite the thorns that ail them. They are the noble ones. They are the beautiful ones. They are the ones we should write essays about in Christianity Today. And many of them have suffered, some even pastors, greatly in this life. They choose Christ quietly.

We should mourn those who take their lives. We should use these moments to destigmatize mental health. We should celebrate the good in the lives of those who have died. But do not sanitize the moral character of the ones who murder themselves. Don’t celebrate those who fail the race. Don’t make Christian examples of those who give up on Christ and his community. And please don’t seek to make beautiful the ones who take their pain and pour it over spouse, children and Christian community.

Suicide is not noble.

4 thoughts on “Suicide is Not Noble”