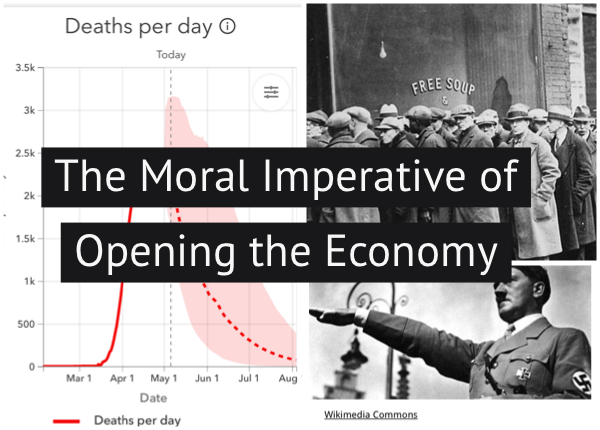 In March, President Trump called for the nation to follow his stay-at-home order to stop the spread. His order has expired and he is encouraging that states move quickly to reopen their economies. Privatly and publicly, public health officials are sounding the alarm. As we open the economy, cases and deaths will soar. Some well-respected modeling suggests that the United States will incur well over 200,000 deaths sometime in June. The United States is on course to have 1-2 million deaths by the time a vaccine is available. Should we shut down the economy and society to save these lives?

This question is a question that followers of Jesus must answer personally. We must also be able to give our best advice to our society for the sake of the common good. It is a mistake to make this a political question involving political calculations. It is at core, a moral question. It is the most important and challenging moral question of our generation. As far as I can see, the most responsible way forward is to open the American economy as soon as is feasible.

There are several reasons that I think that the best moral course is the reopening of our economy. The first reason is that social distancing has not worked as we had hoped. In Europe and Asia, the Coronavirus followed a very specific curve. It rose exponentially and declined in the same way. In the United States, the virus spread exponentially but has not declined in the same way. According to a recent interview, Scott Gottlieb said the quarantine “didn’t work as well as we expected” in reducing cases https://cbsn.ws/2SvOuP2 . We have plateaued nationally with many urban areas–especially Los Angeles and Chicago–still seeing significant growth in new cases and deaths. For a variety of reasons, experts are not expecting a decline but a “slow burn”. This slow burn effect means that cases will grow and so will deaths. In Chicago with a complete forty-five day shutdown, we are seeing 2000-3000 new cases a day. Deaths are rising as well: on May 5th, Illinois had the highest number of deaths in a 24-hour period. A complete shut down is not an option psychologically, economically nor does it stop the spread. Since this is not the answer, it should not be used again.

The common rebuttal to the argument above is that saving lives is the most important thing a society can do and the economy comes in at a distant second. The problem with this argument is that no American official or state leader are focusing on these two areas. If you notice, over the last few weeks the conversation has changed. At first, we were trying to decrease deaths and new cases. These were the metrics by which we were measuring success. This is no longer true. The reason for this is because there is an awareness that we can’t get those two horses back into the stables. Our state and federal governments are now focusing on hospitals’ capacities, testing, quarantining the infected, tracking and tracing. These are the right metrics to use. We can get our ability to meet the challenges of these metrics quickly and we should.

Every hotspot in the United States now has the testing capacity to test anyone who wants a test. The American military and the CDC could easily and quickly supplement tracking and tracing capabilities in needed areas. If in any area, there was a surge in hospitalizations, the federal government could provide new capacity like we have seen in New York, Los Angeles and Chicago. This can be done now. It is a great mystery why this has not been done. Either our leaders are dumb or nefarious. There is no reason to keep the economy closed. It only causes pain.

The most important reason that the American economy needs to open is many more lives are at stake in an American economic collapse than in the spread of the virus. Like I have written before, the collapse of our economy creates the perfect space for the rise of extremist governments. When I wrote this, many people said I was being dramatic or I was focusing on something that is unlikely. It turns out that there is compelling data that shows when a pandemic destroys an economy, bad things happen.

Robert Barro and Jose Ursua from the Wall Street Journal have compiled data enabling us to see what are the major causes of an economic depression. Their research shows that pandemics are a major cause of economic collapses. There is every reason to consider what would be the results of an American depression resulting from the pandemic. In fact, it is foolish not to.

Opening our economy and not experiencing a world economic collapse is not only about personal livelihood–though this is a great moral good that has been attacked by many ‘leaders’ –it is the primary way we can guarantee peace and stability in the world. New research from Kristian Blickle shows a direct tie to the Spanish Flu Pandemic, economic collapse and the rise of fascism in Germany. You can read her research here: Pandemics Change Cities. There is other research that in fact ties the pandemic of 1918 to the economic collapse of Germany and the rise of Hitler.

I have written about how the world’s poor are being forgotten in this economic suicide. I have talked about how we are consciously deciding on world instability and all the dangers this can cause. I have written about the moral good of the free market system. As a follower of Jesus, when I think about the virus and the economy, I must consider all the moral complexities. This virus will kill a lot of people. This is horribly tragic but this cannot be stopped unless a treatment is found soon. But we cannot stop life because something tragic is happening. Life must go on. We must protect our world from dangerous threats. This is our work. From what I can see the right moral choice is to increase tracking and testing and the ability to surge hospital capacities. Then, put on a mask and get to work.