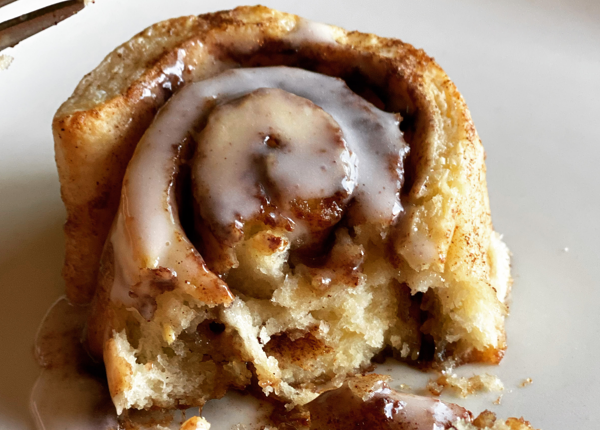 I love cinnamon rolls and love making them. When I make them the boys eat them up. The problem has always been the time and prep. The boys want them almost every weekend but I’m not usually in the mood for all the work involved to get the dough ready. Thus, I began a journey to find a way to cut down the time involved so that cinnamon role become something I can make on a regular basis.

My goal was to find a method that got as close as possible to the homemade, light and fluffy roll that usually takes several hours to make. I think I found it.

I began fooling around with a couple of southern cinnamon roll recipes I found online. Southern rolls use biscuit dough for the roll and then have a milk/sweet sauce that they bake in that keeps the roll moist. I liked the ease of the recipe but was not a fan of the sauce.

But i did like that it used biscuit dough, so I began to do some experimentation. King Arthur has the best biscuit recipe out there and one I use all the time so I just began fooling around. I tried different pan sizes, treated the dough like a pastry dough and played around with ways of keeping the roll soft and tender. Eventually, I was able to get a really nice roll that is not heavy, has a nice rise, very fluffy and is way better than store bought. I have gotten lots of requests for the recipe so here it is along with instructions. Please share how they turned out with a picture!!!

2) Combine the granulated sugar, salt, baking powder and flour. Whisk it a bit to make sure it is well mixed.

3) Add 6 tablespoons of at-room-temperature butter to the flour mixture. Wash your hands with soap and squeeze the butter and flour until the butter has broken apart and has become flour/butter crumbles in the mixture.

4) Add a cup of milk. Combine with flour mixture. I use my hands to to combine; you can use a stand mixer and dough attachment to combine but that’s a lot more work than using your hands and more dishes to clean. You only combine until the dough comes together. If it is not coming together add a few teaspoons of milk and continue combining until the dough comes together. Be careful with that milk, too much and you’ll have a sticky mess.

5) prepare a work area for the dough.

6) place the dough on the work area (if the dough ever is sticking to the pin or roller, add more flour to the countertop),

7) Use your French rolling pin and roll out to about 12×18 (I know you are told never to roll biscuit dough but trust me, everyone is wrong!).

8) Now we are going to treat the dough like we would a pastry dough (kind of!). Take one side of the dough (the shorter end) and fold over the dough and then do the other side.

10) now you are going to take the rest of the butter (10 tablespoons), soften it and spread evenly over the dough.

11) Mix the cup of brown sugar and cinnamon (we love cinnamon so we use 2 tablespoons but 1 is adequate for ‘normal’ people). Spread over the butter evenly.

12) now starting from the long in, roll just like you would if you were making regular cinnamon rolls.

13) right before you finish rolling, brush on heavy cream on the dough that the end dough flap will connect to. This will hello keep the rolls together.

15) add a dollop of heavy cream on top of each cinnamon roll and brush around. Once you’re finished put in the oven.

16) Watch these as they bake because you don’t want to over bake. I begin checking at about 15 minutes and they usually take no more than 25 minutes to bake. Do you want to take them out when they are lightly browned.

17) take a cup of powdered sugar, two tablespoons of milk and stir when a fork rigorously. It should have the consistency of white glue. Remove a roll and pour icing over the top. Then serve!

I know the directions make it feel like it will take longer than 40 minutes but after doing it a time or two, this recipe is really easy. Bon appétit!