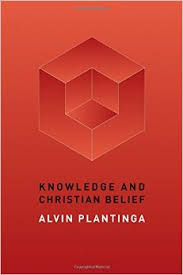 I just finished reading, Knowledge and Christian Belief, by Alvin Plantinga.  It is a great book and one I will probably write a review for later on but wanted to pull out an idea that Plantinga touches upon that I think can help us understand the importance of traditional marriage.  The book which is about how Christianity has its roots in actual knowledge, unintentionally, gives a solid defense for marriage between a man and a woman.

In his book, Plantinga describes how eros is one way to understand our relationship with God and actually is the primary way the persons of the trinity interact.  Eros is a classical term describing one of the forms of love and is most simply defined as desire.  Usually, eros is used to describe sexual love between two persons.  Plantinga shows us eros is actually much more than sexual longing. If Plantinga is right then sexual longing, I think, is a signpost that points to what is happening in the cosmos–the eros of God.  If true, we begin to see why sexual ethics, for the follower of Jesus, are of extreme importance.

First, Plantinga shows us that eros finds its most realized expression in the trinity,

According to Jonathan Edwards, ‘The infinite happiness of the Father consists in the enjoyment of His Son.’  This presumably isn’t agape.  It doesn’t involve an element of mercy, as in his love for us.  It is, instead, a matter of God’s taking enormous pleasure, enjoyment, delight, happiness in the Son.

Secondly, Plantinga believes God in His overflowing delight invites His people to encounter His eros,

The church is the bride of Christ, not his little sister.  Theses scriptural images imply that God isn’t impassive, and that his love for us is not exclusively agapeic.  They suggest that God’s love for his people involves an element of desire: he desires the right kind of response from us, and union with us, just as we desire union with him.

Do you see the progression?  The eros of the trinity overflows and becomes a place we are invited to.  God desires us and the imagery that the Scripture uses is the desire of a bridegroom for his bride.  This divine marriage and the eros in it is what life is all about!

And finally, Plantinga sees eros emanating from the bride for the bridegroom,

This love for God isn’t like, say, an inclination to spend the afternoon organizing your stamp collection.  It is longing, filled with desire and yearning; and it is physical as well as spiritual: ‘my body longs for you, my soul pants for you.’  Although eros is broader than sexual love, it is analogous to the latter.  There is a powerful desire for union with God, the oneness Christ refers to in John 17….

We desire to be one with the bridegroom, to be in union with Christ.  This is eros in action.

If Plantinga is right about eros both in the trinity and our life with God, then I think there are some conclusions we can make concerning our sexual nature, activity and relationships:

I would love to hear your comments.  What am I missing?  What has been your experience with eros?  Does it weird you out that God has eros for us?  Comment below