No Love For Michael Curry 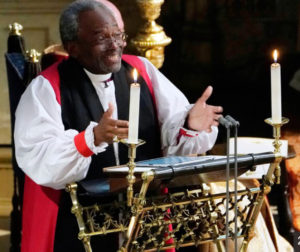 Michael Curry gave a powerful sermon at Prince Harry’s wedding on Saturday. A few days later, former chaplain to the queen, Gavin Ashenden, wrote this reflection. I posted Ashenden’s reflection because of its depth and Christian beauty. Lots of my Christian friends on fb were critical of Ashenden and in essence said, “Give Curry a break. He was preaching to the world at a wedding…. And love is a good thing.”

I think the larger issue with Curry representing Christ isn’t necessarily what he said but didn’t say. He was preaching to the world. The question is did he preach Christ?

Instead of Christ, he preached love. But what does he mean by it? Curry says, “Oh there’s power, power in love. Not just in its romantic forms, but any form, any shape of love.” In a world filled with all kinds of “love”, we need to define love. He does not and just says any ole love will do. We are left to wonder if the word love means anything definite at all. Sure, he alludes to love but never states the radical, exclusive Christian message: Christ is love and he died to redeem, save and restore you. It’s not any love that does this (in you or the world) but Christ’s. This is the exclusive and radical message of Jesus. Curry didn’t share that message.

Well, you might say he alluded to it. Not really. Curry declares: “He didn’t die for anything he could get out of it. Jesus did not get an honorary doctorate for dying. He didn’t… he wasn’t getting anything out of it. He gave up his life, he sacrificed his life, for the good of others, for the good of the other, for the wellbeing of the world… for us.” Really? Here is his chance to share the gospel of the kingdom but he tells us that Jesus is some kind of lump-of-coal sacrifice that just wanted to do some good in the world—doesn’t want to offend I assume. This is more eastern mysticism than anything Christian. It was for joy that he died. It was to get a bride. He was intentional and passionately focused. That’s the gospel of love.

No talk of sin, the broken soul, or Christ’s ability to forgive and restore. This is what Christ does. Instead, Curry talks of neighborhoods, governments and child hunger. All important issues but are they central to love? Christian love that is?  The way of the cruciform Christ is this: first he transforms individuals and they go in his love bringing his kingdom. Here is the issue: Curry is saying any kind of love can get this done. Just go do it. We will have to see if such advice works. Sounds more like Oprah than the resurrected God.

Finally, just to stir the pot, listen to these words from preacher: “When love is the way, there’s plenty good room – plenty good room – for all of God’s children.” What do you think he is referring to? Of course we could give it a biblical explanation–God so loved the world…–but Curry, I would bet my right ankle is not thinking of John 3:16 to make his point. This is his truly ‘radical’ assertion of the day and it isn’t Christian. He wants ethics thrown out the window and identity politics be the new national religion. This is the coded language of the “radical left”. Love now means accepting anything–behavior, views and whatever pronoun one decides they are at the moment–and if you stand in the way of “love” then what an awful person you must be.

The way of Jesus, as presented in the scriptures and history, is radically different. Jesus will party with anyone and brings his goodness. But to receive his life they will have to die. To self and yes to ego. This bloody road is the only road to love. And from there comes resurrection life.

Instead, Curry preached the politics of the left. And since this was a Christian marriage, one would hope Christ’s message could at least been presented.

The world is clapping and thankful that now religion endorses their malformed love. But make no mistake, real love was no where to be seen.