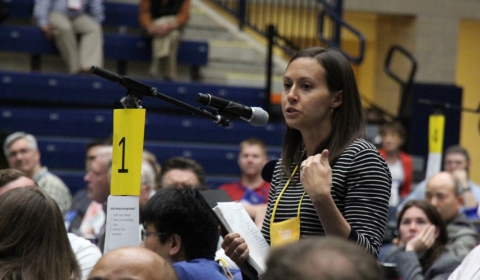 The 2019 general synod is over and there are two general feelings taking place across our denomination. Either, a sense of relief and hope that the denomination is moving the “right way”. Or, a sense of despair that things will fall apart for “our” side. It has gotten tense on this portion of God’s garden.

Perhaps one of the most controversial decisions of this year’s synod was the passing of this overture:
to amend the RCA’s Book of Church Order so that only a simple majority of classes—rather than the current two-thirds majority required—would need to approve any amendment proposed to implement the 2020 General Synod’s in response to the Vision 2020 Team’s final report.

The response was intense. While many support the proposed amendment (that must be approved by 2/3 of classis), others spoke about how this move is not “reformed”. Some even made moral judgments about the proposed amendment (this amendment is an immoral way to do church; it’s shady, mean and fleshly). These comments were made from RCA pastors, professors and elders. Both conservative and liberal. Are they right?

This week, I went and read book 4, in particular chapter 10, of Calvin’s Institutes seeking to answer two questions:

1) Is the proposed amendment “reformed”?
2) Can a procedural process change be immoral or ethically wrong?

At the heart of reformed polity according to Calvin is Paul’s admonishment, “All things should be done decently and in order” 1 Corinthians‬ ‭14:40‬ ‭ESV. ‬‬Good polity provides “safety for the church”. Calvin continues,

we hold that the removal of them would unnerve the Church, deface and dissipate it entirely. For Paul’s injunction, that all things be done decently and in order, cannot be observed unless order and decency be secured by the addition of ordinances, as a kind of bonds.

So was this vote that must now be approved by 2/3 of the classis and return for a vote next year, not reformed? Did this synod demolish reformed polity? Is chaos now ruling? The answer is no. The overture was presented to general synod based upon observations of 2020 team of delegate feedback, debate ensued and a vote followed. Each classis will consider the proposed amendment and vote on its acceptance. It will only be enforced for the recommendations of the 2020 team. This seems like the very definition of doing the business of the church in good order. It seems over the top—bad faith—to claim that the reformed polity has been toppled. It makes me wonder if people actually know what words mean?

It might me argued that making a change from the regular way of doing business is not reformed. Our tradition, the argument goes, protects us from making rash decisions. But Calvin seems to make room for exceptions to normal polity as well. He writes that we must, “always attend to the exception”. The general synod acted within its authority and sent a proposed amendment to the classis for their approval or rejection. There is a valid argument to be made that this is a time for an exception to be made. The 2019 general synod should be very proud for living up to epitome and good of reformed polity.

Well maybe it was done in a reformed way but maybe the policy itself is immoral. To enact such a change has moral implications. In other words, if you voted yes you’re a bad person. Calvin speaks directly to such a charge (no doubt this is an old accusation):
these ordinances, must not be thought necessary to salvation, nor lay the conscience under a religious obligation; they must not be compared to the worship of God, nor substituted for piety.
In other words, polity practices concerning process are not moral or immoral. They don’t speak of hijacking the debate or bad people. They are the best effort of the church to move the right way. They are important but they say little about ethics.

So according to John Calvin, the father of our polity, what was done at General Synod, 2019 was reformed and can be embraced with a clear conscience.