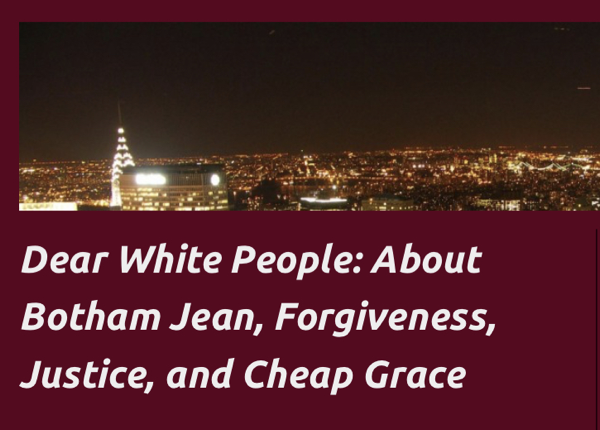 Botham Jean, Michael Brown and Trayvon Martin are very human examples of a sobering, American reality. Research shows, “The risk of being killed by the police is more pronounced for black men, who are 2.5 times more likely than white men [to be killed by the police] …”. This reality is devastatingly painful. It is devastating because the lives of too many young black men end tragically. It is painful to a suffering black community who rightly fear for the future of their young men.

We all know that racists are among us. We also know of the problems of racism that have been found in police departments like the LAPD. Perhaps it is fair to say that there is racism in all of us. It is also easy to see how many contemporary black communities in the United States are quite like the Jewish ghettos of old Europe. Jewish ghettos were segregated Jewish communities that were forcefully separated from the benefits and opportunities of the larger society; they also experienced horrible bigotry from non-Jews. The new ghetto is no longer mandated by law. Instead these communities suffer from generational challenges that have deep and complex roots that act as a barrier to the benefits and opportunities of the larger society.  A lack of local economic opportunities, school systems that cannot provide high-standard educations, and the breakdown of the family all come together to create a “wall” that 14% of our country must face to one degree or another. This is an American disaster and it needs people and politicians of good will who are willing to find constructive, helpful and healing ways forward.

This is what I was hoping to read when I read this essay from Reverend Dr. Karlyn Carlo. Carlo is a retired police officer, pastor and theologian who enters the chaos, pain and discord of the Botham Jean murder, the conviction of Amber Guyger and the forgiveness given by Brandt Jean, Botham’s brother. I was hoping for a Christian perspective rooted in the bible and from the best voices of our past. Instead, what I read is not Christian in any historic sense. Perhaps worse, her hermeneutic and the remedies she gives from it have little to do with Christ. Her essay is deeply troubling to me.

I would not have even engaged with Carlo except a significant leader in our denomination promoted her essay on social media. With his promotion comes endorsement. He is a godly man who I believe is deeply mistaken in promoting Carlo as a Christian voice. He does so at the peril of many young leaders and Christ followers who will embrace her worldview as Christian simply from his endorsement. My hope in this essay is to simply reveal Carlo’s philosophical and political motivations and by doing so encourage followers of Jesus to find other ways to bring shalom to this broken world.

Before I take you into her essay, we need to take a short philosophical journey. Douglas Murray, in his book, The Madness of Crowds: Gender, Race and Identity, does a great job of succinctly and clearly laying out the foundations from which Carlo writes. Any attempt at understanding the bible demands that the reader embraces a hermeneutic. A hermeneutic is simply the interpretative lens by which you read the text. For example, I seek to bring a grammatical-historical method to the text. Such a hermeneutical approach seeks to understand the meaning of the text from the text itself. It also presupposes that the text is divine, inspired and inerrant. Carlo uses a radically different kind of hermeneutic. It is a hermeneutic built upon the philosophical work of Michael Foucault and the intellectuals after him who built post-Marxism.

In the 20th century Marxism asserted that the world was a fight between the bourgeoisie and the proletariat. A war between the owner and the worker. Marx wanted to unite the workers, the powerless, against the powerful and take the power back that they deserved. Marx saw power in terms of wealth. He believed that by the redistribution of wealth, the world would be a much more equitable place. Much of the 20th century was fought over whether Marx was right. Millions lost their lives in the politics that sprung from Marxism. It is now almost universally agreed that though Marx was brilliant, he was utterly wrong. In response to the failure of Marxism, post-modern philosophers sought to articulate a Marxist vision of the world that would work in this Western world. Marxism was wrong but it is not dead. Thus, post-Marxism was born.

Post-Marxism keeps the struggle of Marxism but changes the groups that are struggling. Ernesto Laclau and Chantal Mouffe share the new vision:

To what extent has it become necessary to modify the notion of class struggle, in order to be able to deal with the new political subjects – women, national, racial and sexual minorities, anti-nuclear and anti-institutional movements etc. – of a clearly anti-capitalist character, but whose identity is not constructed around specific ‘class interests’ (Ernesto Laclau and Chantal Mouffe, ‘Socialist strategy: Where next?’, Marxism Today, January 1981)?

At the foundation of Laclau and Mouffe’s reimagination of Marxism is Michael Foucault. He more than any other is the intellectual father of what is now known as the Social Justice Movement.  This movement according to Murray, “provides a lens for understanding the world and a purpose for an individual’s actions and life within the world”. This is a world of hierarchies. At the top are white, heterosexual males. Underneath are all other groups who are now, “the new political subjects”.

In this post-Marxist world comes Peggy McIntosh and her book, “White Privilege: Unpacking the Invisible Knapsack”. Building upon Foucault, she brings the Marxist struggle to race. Consider this concise summary of McIntosh’s book:

people must acknowledge the privileges that can be identified in their own lives. She says that the people who benefit from the existing power structures have not ‘earned’ them. And most importantly she makes the claim that a variety of groups (including people of different sexual orientations and races) suffer from ‘interlocking oppressions.

The way to fix this “White Privilege” is to, “‘raise our daily consciousness’ on the nature of privilege and attempt to use ‘our arbitrarily awarded power to try to reconstruct power systems on a broader basis’ “(Murray, Douglas. The Madness of Crowds. Bloomsbury Publishing. Kindle Edition).  This is simply applying Foucault and Marxist hierarchies to an age-old problem.

So, here is a summary of post-Marxism: the only thing that matters is power—who has it and who does not. There is a social construction that places white, heterosexual men at the top and everyone else in subjection to their abuse of power. What must be done is that these white men need to acknowledge this is true and that what they have is because of their skin color not competency. The remedy to this is for white men to give up the power they have and give it to the other groups.

Here are Carlo’s thinkers: Karl Marx who famously said that, “Religion is the opium of the masses”; Foucault, a student of Nietzsche who saw all moral truths as mere fictions used to, “legitimize the exercise of domination” (Coffey, John. Michael Foucault and postmodern atheism: life after the death of God); And McIntosh’s whose work has reduced Christianity to a power center of “Christian privilege”. Instead of Christianity being a source of truth and hope, Mcintosh sees it as another example of concentrated power that needs to be shared.

With the above as a primer, now let’s consider Carlo’s essay. She starts off the essay in the title: Dear White People. She begins the whole argument by framing her argument in the post-Marxist class struggle. There are people with power and those who don’t. There is conscious and unconscious white privilege and Carlo wants to talk to the people, “at the top”. She then lets the reader know that she is, “a white woman, also a former cop and a Christian theologian.” These are identifiers of power. She is letting us know that in the power structures of post-Marxism she has power in spades. She has decided to use her considerable privilege to take away some power from the “dear white people” and give it to “black people”. I am sure the black community is thankful.

She goes on to frame the crucifixion in terms of post-Marxism. Jesus is the victim and the Romans are the oppressors. The Romans have the power and Jesus has none. The cross is now a, “lynching tree.” And Jesus didn’t forgive his killers, “he essentially writes them off as ignorant”. The reason for his death? He died because he shared good news to the “oppressed”. It is almost as if Jesus read Foucault before he got on the cross.

She then ends the essay and blames those on top of the post-Marxist hierarchy as those to blame, to some degree for Botham Jean’s death. She also blames “dear white people” for Brandt Jean’s giving forgiveness to Amber Guyger. He was forced to do it by powers that he is not even aware of. Brandt wasn’t acting from the overflow of grace but instead he is a victim of the power struggle. In the world that Carlo envisions, there must be winners and losers. Now it is time for white people to lose. Her very rhetoric is a kind of shake down. It is “our” turn it seems.

Hopefully by now any thoughtful Christian does not think that Marx, Foucault, and Mcintosh are good teachers on how to read the bible. All they do is bring post-modern chaos into the Bible. There are real problems, real racists and the bible has real answers. The answers have nothing to the redistribution of power. Nor is it about group shame or reinterpreting motives. Instead, the answers are found from the life and ministry of the man from Nazareth. He did come to bring good news to the oppressed. He is the good news. His good news stood for justice, overturned tables and confronted leaders. His good news led him to the cross. It is a cross that was chosen by him for the sake of the world. It is a cross that is the symbol of God’s power not Jesus’ victimization. It is a cross that made way for resurrection. Its power is among us today. It has flowed through the greats of the faith—from Augustine to Dr. King. It is on full display in the mercy that Brandt Jean gave to his brother’s murderer.

We don’t need post-Marxism to fix the world. Jesus is the great hope of the world and the racism that fills it. Our denominational leaders can do better than promoting essays like Carlo’s. I encourage our denominational leaders to promote answers that flow from Christ himself. The path of redemption and racial reconciliation is right before us. Jesus, the Christ, leads the way.

2 thoughts on “Botham Jean, Racism, Cops, Post-Marxism, the RCA and the Bible”