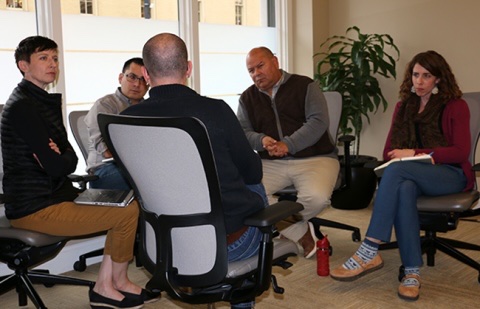 This is a reflection on two denominations, the RCA and United Methodists. Both have been in turmoil over human sexuality and biblical hermeneutics. Both have conservative majorities and also tenacious, liberal minorities. Both have been on this journey for a long time. One has found a way forward; the other is struggling to do so. One will survive; the other will decide its fate in a few months.

After a contentious 2019 gathering where the United Methodists decided by 54% to affirm a traditional and orthodox position on human sexuality, the denomination was in chaos. The progressive faction was not going to give up and the conservatives were aware that this did not mean the war for orthodoxy had been won. Would they stay together and fight or find another way? After years of blood-letting and pain, the Methodists acted in the way of wisdom. The New York Times reports,

In the months following, a plan was put together by a 16-member committee of bishops and other church representatives, who determined that separation was “the best means to resolve our differences, allowing each part of the Church to remain true to its theological understanding.

What the Methodists have come to realize is what the RCA is struggling to see. There is no “being together” when the very nature of the gospel is contested.

Finding a way forward has been difficult in the RCA. In the most recent update of the 2020 Vision Team, you get the sense that there is no way forward for our denomination:

A crucial moment that shifted our understanding was recognizing the difference between General Synod statements on human sexuality and the functional reality of our structure. This team believes the denomination has existed for a long time with functional diversity. Historically, we have been united around our standards, and because of the way our polity works, functionally the RCA is theologically diverse about a range of topics, including human sexuality, infant baptism, women in church leadership, and others. Our practices vary from classis to classis and congregation to congregation.

The folks on the 2020 team are pragmatic and kind. There are deep divisions in the RCA and presenting something that can actually pass the general synod and receive the requisite 2/3 approval from the classes is an uphill battle at best. So the Vision 2020 Team, if it keeps on the path of the statement above, will recommend that nothing changes. This will easily pass because no vote is needed.

“Functional diversity” is not as healthy as it seems. Functional can mean two different things. It can mean operating as intended; as in, the engine is fully functioning. It can also mean it is ‘working’ despite itself; as in, he’s a functional alcoholic. We all know that when we use functional in this way, we aren’t commending it but saying, it’s kind of working from what we can see but the hidden costs could be severe. It is this second meaning of functional that should be applied to the RCA. If this is what we decide upon, liberal churches will perform gay marriages while conservatives stand against it. Liberal churches will ordain ministers who are openly gay and in same-sex relationships. The RCA is a functional alcoholic. It kinda of works but the damage to our collective soul is unseen and unknown.

Our functional diversity is the problem not the answer. Underneath the veneer of functioning is a system that has been covertly built to move a liberal agenda forward in our denomination. It is a system that all but guarantees that we do not have the flexibility to do what the Methodists have just done. In fact, we have ended up in a place as a denomination that keeps our true values from emerging and represented in our creeds. Through inattention, neglect and liberal ingenuity our classical map has been structured so there is no way forward.

Consider the process that must be completed for an amendment to change our constitution. For each amendment, after being passed by a simple majority of the General Synod, a 2/3 majority of classes must vote in favor of the amendment. Currently, we have 46 classis. This means that 31 classes are needed to pass an amendment. After the move by conservatives to change the 2/3 requirement to simple majority, there was a passionate defense for the idea of needing a super majority to have a true reformed polity. I now see why this 2/3 majority is being defended by the liberal wing with such vehemence.

Classes vary so much in size, health and effectiveness that by keeping alive those that ought to be disbanded and not breaking up large classes into smaller ones so the voices of our members can be more readily heard, liberal voices are given a larger influence in our denomination than is appropriate. If classes had to have a standard organizational framework across the denomination, the real RCA would be represented at our synodical gatherings . Classes should have an ideal size representing a certain number of confessing members and churches; if one gets too big, a new one should be birthed; if one is too small, it should be consumed by a larger one. Classes should be measured by their missional effectiveness. Are churches being planted, disciples being made, and are confessing members growing in Christ? If not, the classis is unhealthy and needs to be disbanded and the churches brought into effective classes. If a classis is effective in mission, it should help form other classis learning from their wisdom. Defining classis in these ways would give voice to the silent majority. At the very least, this would enable for us to split amicably. More likely, the RCA would emerge strongly conservative.

As it stands today, the recommendation of the 2020 Vision Team sets up an inevitable breaking of the denomination. It gives this denomination, who is overwhelmingly conservative, to the progressives. This will happen not because of reformed polity or protecting the minority voice but because we have allowed a small segment of our denomination to have and use power that isn’t legitimately theirs.

There is still time for a recommendation from Vision 2020, or from the floor of General Synod. Recommend that a classis must have a minimum of a thousand confessing members and no more than three thousand. Recommend that any classis that does not plant at least one church every five years will be deemed not functioning and disbanded. These two changes will show all of us what is the real RCA. Then, we will have a functional reality that is optimal and beautiful. The theological minority will still be heard but our denomination won’t be held hostage. Otherwise, this denomination will split but not in the order, kindness and wisdom of the United Methodists. Ours will be a messy divorce. The very house of our denomination will be torn asunder. Our spiritual children will be hurt because the grown ups couldn’t see beyond themselves. May the wisdom, sacrifice and humility of the United Methodists encourage and inspire us to not take the path of least resistance. I’m not optimistic.