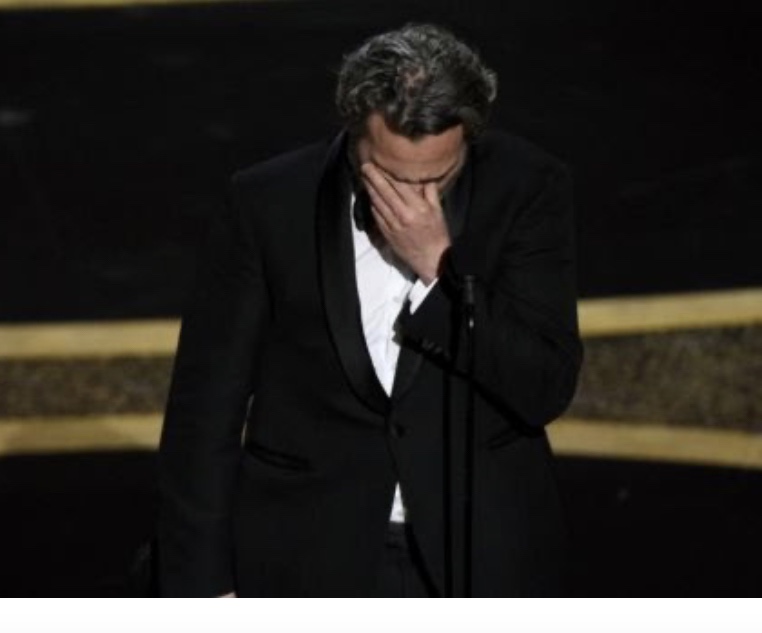 My life changed last night. I was watching the Oscars while still explaining to my boys why one male reporter was wearing a pretty dress during the red carpet time.

Then the life changing moment happened.

Joaquin Phoenix won the Oscar last night for best actor. When he came up and gave his acceptance speech, I was mesmerized. It was like all these pieces just clicked for me. When someone is so rational, down-to-earth and passionate as Joaquin, it’s hard not to have all your opinions change.

I’ve been looking for Joaquin’s home address to visit my buddy for a few weeks but can’t find it anywhere. He’s probably being rational and passionate somewhere.

He is so brave.

I am a self-described thought leader and want to help you. I’m giving up all animal consumption and the use of animal products. I want you to join me! Below are just some of Joaquin’s most convincing arguments with some of my thoughts as I internalize the wisdom of this spiritual giant.

We’re talking about …[the idea that] one species has the right to dominate, control and use and exploit another with impunity.

I for one think we should do whatever it takes to free all caged animals. I released my dogs, snake and turtle this morning.

Update: the turtle and snake died from the cold and the dogs mauled a neighbors’ cat. At animal control right now. They are talking about charging me with animal cruelty and euthanizing the dogs. Don’t tell Joaquin! Hoping for a miracle.

I think that we’ve become very disconnected from the natural world. And many of us, what we’re guilty of is an egocentric world view: The belief that we’re the center of the universe.

Oh Joaquin, why do humans think only about the plight of other humans? I mean the squirrels and the ducks’ plight are as important as those starving ego-centered, third-world kids. I’m canceling my World Vision giving and will start giving money straight to Sarah Mclachlan. She gets it (love her dog song!) and will know where to use the money.

We go into the natural world and we plunder it for its resources.

Plunder, plunder, plunder. We need to get back to our gatherer roots. All this modernity is madness! I hate living in a house with heat. It makes me feel so dirty. I’m hoping to live in a hut with Joaquin and my family. He would love that! Gathering berries with the whole crew!

We feel entitled to artificially inseminate a cow and when she gives birth, we steal her baby, even though her cries of anguish are unmistakable. And then we take her milk that’s intended for her calf and we put it in our coffee and our cereal.

Monsters!!!!! I hate the milk drinkers. That milk is for baby cows, not you! Are you for cattle infanticide? Shameful. All those dairy cows should be given the homes of the baby killers.

Sorry for the passion; it’s just that I get so worked up about this stuff. Also, my wife says I’m a hypocrite because I have consumed a lot of milk. Well, I’ve been transformed and I told her to shut up.

Update: Amy says that she is going to her parents house until I get on medication. So typical of the cow-baby killers.

[We need to] develop and implement systems of change that are beneficial to all sentient beings..

When my brother Joaquin shared this, I realized something. There are only humans in Congress. It took me a minute because a few of Congressmen were ‘species ambiguous’ but then I saw the world as it actually is. Unbelievable!!!! There are only humans in all governments in the world; God help us. But change starts at home. So, I think that dolphins, badgers and geese are a good place to start. They can join Congress. Can’t say they would do any worse than the humans in there right now!

There’s more but I need to get rid of all animal products before the boys get home. They will need some time to process the changes. But like brother Joaquin always says,

When I go out with the ladies, I don’t force them to pronounce my name. I tell them I like to go by the nickname of Kitten.