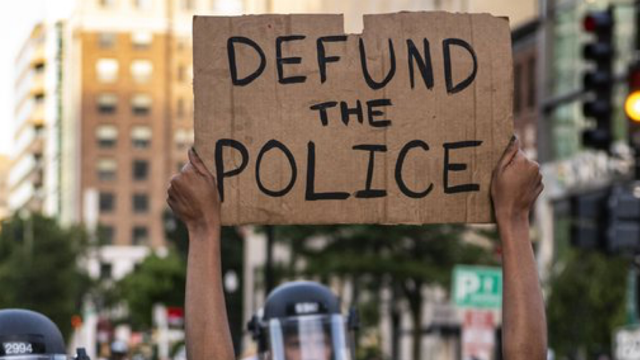 The murders of Ahmaud Arbery and George Floyd have reignited decades old pain and anger circling race, police violence and inequality. The problems are more than cosmetic or anecdotal. These murders are symbols of a reality that the black community has known for a long time. People of color are treated differently by the police. Maybe it is time to Defund the Police.

The Data Shows a Real Problem

One recent study showed that African Americans are much more likely to be killed by the police than whites; young black men are especially in danger of being killed.[1]

Another study showed that interactions between young blacks and the police negatively effects outcomes for those minors; there is a strong link between police interactions with black children and future criminal behavior.[2]

Another study shows that blacks are three times more likely to experience the use of force by police than whites.[3]

Finally, while the disparity between black and white imprisonment rates has been decreasing over the last two decades, African Americans are still five times more likely to go to prison than whites.

Why Defund the Police?

The answer for many is to defund the police. While“Defund the Police” can mean different things to different people, there are two primary reasons that I see used as justification for this idea. First, the foundation and essence of policing is racist; it is a way to subdue the African American community.

Modern policing is fundamentally racist because, according to the movement, its origins were the ‘slave patrols’ of the antebellum South. Slave patrols were groups of white men who harassed and instilled fear in black slaves. The patrols were violent and nefarious.

According to the Defund movement, the violence towards black Americans is what the police was designed to do. You don’t reform an institution so sick; you destroy it.

Then there is the reason given that the police aren’t helping our communities thrive. According to the ACLU, only 5% of policing is concerning violent crimes and there is no evidence that the police lower violent crime.[4] The movement asserts that we are spending billions of dollars around the country for tens of thousands of armed persons who bring potential violence to every interaction for little good. Our neighborhoods are filled with problems that force can’t fix. It’s time to reallocate resources.

In light of policing’s inherent racism and its ineffectiveness, resources from police departments need to be substantially reallocated. This is according to the Defund the Police movement. A major percentage of annual budgets now allocated for policing should be spent for social services. Counseling, community investment, before and after school programs, mentoring programs and neighborhood initiatives will do much more good then armed men. The remaining police—smaller and hopefully hardly used—would be limited in the use of force and have more community oversight.

Should we Defund the Police?

Defunding the Police is based upon a faulty historical premise. The premise is that the institution of policing is inherently racist because it was founded to enforce slavery and wreak violence on blacks. This is incorrect. In fact, the birth of modern policing took place in slave-free England.

Slave patrols were formed in the 18th century as a way to uphold slavery through the dehumanization of blacks. Modern policing emerged from the English system that emerged in the 1820s. One historian writes,

In 1829, Sir Robert Peel (Home Secretary of England) introduced the Bill for Improving the Police in and near the Metropolis (Metropolitan Police Act) to Parliament with the goal of creating a police force to manage the social conflict resulting from rapid urbanization and industrialization taking place in the city of London.[5]

Populations were exponentially growing in London and other industrializing cities. With people came violence, crime and civil unrest. It was the placing a large population together in a small area that necessitated a professional police force. The modern English police was a great success. For the first time, crime was being stopped before it happened. The police brought stability and safety to London.

In 1838 Boston became the first city to embrace the English model.[6] New York and Philadelphia followed. These cities were growing because of industrialization and their populations were exploding. Like London, there was a necessity to have a professional force whose duty it was to keep the rule of law, protect the citizenry and protect property rights.

These police forces were quite different than previous law enforcement. Modern police had paid, full-time officers, rules and regulations concerning conduct, and were answerable to local governments.[7]

Before this, policing was a volunteer arrangement. A volunteer would warn the town against obvious threats but mostly acted after a crime was committed. There was no means to prevent crime. More troubling, pre-modern policing was a tool of power by a monarch or lord. It operated based upon his notions of justice, but the old system was completely unable to deal with the modern city.

It is true that in the south there were slave patrols. These are horrible expressions of humanity’s worst instincts. It is also true that some members of the slave patrols joined the southern cities new police departments after the Civil War. And no one disagrees that the police in the south were the means of upholding Jim Crow. But this was because the local police were not living up to its ideals. Racism replaced the American promise.[8]

The police system’s foundation has noble roots and purposes: protect citizens, their rights and their property. Like all institutions, it has had to struggle and grow to live up to its noble ideals. The sin of racism has and might still have infected policing, but this is quite different than being created to uphold racism.

A Social Experiment: a community without the Police

Are the police effective? If they were removed would things get better?  At the end of June 2020, a group of protestors took control of six city blocks in downtown Seattle. They kicked out the police. Embracing socialist values, people could eat and live without cost. Capital Hill Autonomous Zone (CHOP) became a symbol of what is being called for around the country: much less police and much more community involvement. The problem was that CHOP descended into chaos.

Crime increased over 500% and property rights were completely disregarded during this short experiment. It only took weeks for the whole experiment to fall apart. The turning point was when two children were shot at the center of CHOP, one died.[9] Without the police, this experimental community fell apart in just three weeks. It was only when the police came in force to restore order and safety did downtown Seattle become safe for the citizenry.

We cannot forget that every human has evil at the core of his or her heart. If it is not restrained, evil will run rampant. The government and its institutions have been given by God for the common good (Hebrews 13:1-7). This includes the police. In this world human flourishing must be protected. The police protect the public from those who would flaunt order and law.

The Need for more Investment not Less

We need to increase access to mental health services, interventions for at-risk youth, invest heavily into minority communities, rethink and be creative with education and do whatever else we can to bring the American promise to every American.

Like every American institution, the police must continue to strive, fight for and grow into its ideals and purposes. There is hard, complicated work to be done.

It would be my hope that we can come together in supporting the the police while honestly addressing its problems.

Let’s fund the police. Let’s fund other programs to serve the community. Let’s partner together so that the American promise is available to every citizen.