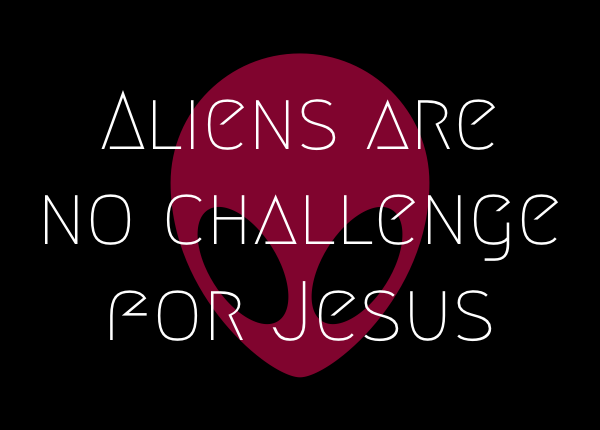 Recently, the Office of the Director of National Intelligence released the much anticipated, Preliminary Assessment: Unidentified Aerial Phenomena. While the report raises more questions than it answers on extra-terrestrial life, it has sparked renewed interest in what definitive proof of alien life would mean for humanity and its religious traditions. Some experts believe such proof would be catastrophic for Christianity.

According to astronomer David Weintraub, in his book Religions and Extraterrestrial Life,

. . . most evangelical and fundamentalist Christian leaders argue quite forcefully that the Bible makes clear that extraterrestrial life does not exist.

At first glance, the Bible seems to agree:

All of this, if true, paints a picture where aliens have no place in the Christian story and their existence would shake the foundations.

Yet, these seeming barriers dissolve in light of the biblical record. Interwoven within the biblical story is a cosmic story of the Hebrew God who makes salvation possible in Jesus for anyone marred by sin—“There is salvation in no one else, for there is no other name in the whole universe by which people can be saved” (Acts 4:12, translation mine). Our work is to read the biblical story through a cosmic lens. Then, we will find that aliens are no challenge for Jesus.

While the creation account in Genesis 1 and 2 is earth centric, it is by no means exclusionary of alien life. John Sailhamer in his brilliant book, Genesis Unbound, gives us a Hebrew framework that opens the possibility that Genesis gives an account of God also creating alien life.

The central point of Genesis 1:1 “is that God created all things” (Sailhamer, kindle, location 286). The phrase “heavens and earth” is a Hebrew merism that is best translated, “the totality of all that exists” (ibid, location 605) or the “entire universe” (ibid., location 472). This includes all life that exists in the universe. If aliens exist, the Bible says God created them.

The Genesis story after 1:1 is focused on God’s special work of preparing a specific region on earth for his people—the promised land (ibid., location 770). The literal seven days of Genesis really happened but it’s his work for his covenantal people on earth not the whole universe. Who can fathom what God has created in the vast universe when he created the universe in Genesis 1:1?

is a block of time which precedes an extended series of time periods. It is a “time before time.” The term does not refer to a point in time but to a period or duration of time which falls before a series of events. (Ibid, location 372).

After the “beginning“ of Genesis 1:1, the text tells us about God’s special creation of humanity. Yet, within the “beginning” of Genesis 1:1 are most likely eons of ages; for sure, there is an expanse of time where God’s creative work could have been happening before his creation of the first Adam and Eve and his preparing a land for his covenant people.

If true, how are we to understand man’s place in creation? Many theologians have surmised that man is the crown of creation because we bear the image of God. Theologians have considered this reflection of God in humanity to mean that we are spiritual, have a will, can conceive of good and evil, act as moral agents and have unique creative abilities. Intelligent aliens with similar attributes would seemingly unseat humanity’s centrality to creation.

Of course, one could argue that only mankind has a spiritual life like God. Consequently, whatever else might be true of alien life, it must be only physical without the ability to relate to God. Another option is that aliens are part of “cosmic forces” or “principalities and powers” referred to by Paul. In this case, it very well could be demonic hosts. While both are possibilities, they also could be beliefs that are akin to the old belief that the whole universe orbits the earth.

If aliens are created moral agents with a conscience—the law written upon their hearts—then it seems that they too would bear the image of God. It is hard to fathom that a person could have these attributes and not bear the Imago Dei. While the Bible clearly says that on earth humanity alone bears the image of God, it does not say that humanity exclusively bears the image of God in all of creation. There seems to be no compelling theological, eschatological, biblical, or as we will see, sortological reason that this could not be the case. In fact, it would seem inevitable for the great artist God, revealed in scriptures, to have filled the universe with a diversity of intelligent creatures who he can love and who can love him back freely.

What about sin, Jesus, the cross and salvation?

In the biblical tradition, sin, redemption and relationship with God are central to the purposes of creation. If intelligent aliens exist with similar attributes as humans, God’s cosmic purposes would seemingly include them; if not, then there is a systemic problem with Christianity or deep misconceptions about it.

Romans 8 seems to assert that sin is a whole universe problem. All of creation has been in “bondage to corruption” and “groans” for “freedom” and “redemption” (Romans 8:20-21). Sin has infected and ruined the universe. If true, was it adam who unleashed it everywhere?

While “sin came into the world through one man” (Romans 5:12), there is no reason to think that sin didn’t enter into other worlds through others. Perhaps sadly, the universe is filled with creatures like us —giving away our birthright for a chance to be like Him.

While sin perhaps popped up in a variety of ways throughout the universe, Christianity makes an exclusive claim concerning the means to redeem sinners. The historic person of Jesus Christ—his life, death and resurrection—is the exclusive salvific good news for the whole universe.

First, the Bible says that there is one Lord and God. In the book of Colossians, Jesus Christ is that Lord and God:
15 He is the image of the invisible God, the firstborn of all creation. 16 For by him all things were created, in heaven and on earth, visible and invisible, whether thrones or dominions or rulers or authorities—all things were created through him and for him. 17 And he is before all things, and in him all things hold together. Colossians 1:15–17
Notice that there is nothing that Jesus is not Lord over. While some theologians believe in the idea of a cosmic Christ of which Jesus is one expression, Colossians says that Jesus of Nazareth is the Christ and there is no other.

Further, he alone is the only way to be saved. Peter says “there is salvation in no one else” (Acts 4:12). There are multiple ways to sin but only one to be saved. So magnificent and powerful is this salvation that it can reconcile even aliens who trust Jesus Christ: “and through him to reconcile to himself all things, whether on earth or in heaven, making peace by the blood of his cross” (Colossians 1:20, emphasis mine).

Let me remind you of the redemption story. From multitudes, for reasons that only God knows, Abraham was chosen. He was an old nobody with a barren wife likely to be forgotten at death, yet he was chosen to walk with God. Israel was a small insignificant country among unparalleled powers, yet it was chosen among all the nations as the nation God would reveal his name and his everlasting love. At the height of the Roman Empire as great men said and did great things, God chose to come in the flesh in a ghetto of the empire. The incarnate God was easily missed in the places of power but he was God among us. Even his followers follow this inversion—“not many of you were wise according to worldly standards, not many were powerful, not many were of noble birth” 1 Corinthians 1:26.

Consider this: God in his wisdom could do the great inversion on a cosmic scale. In an out of the way place, in an insignificant galaxy, on a speck of dirt, God has made himself fully known in Jesus Christ. In this way, the earth and humanity are central to creation. Jesus makes it so.

What about the gospel for aliens? The command to go make disciples in Matthew 28:19 uses the Greek word ethnos to describe where we should go to make disciples. While it is traditionally translated ‘nations’, it could as easily and perhaps be better translated “of any unbeliever”.

Thus , once again God will use the foolish things to shame the wise. God will use the church that started on earth—filled with insignificant and despicable creatures—to be the means of sharing the unsearchable riches of Christ.

Aliens are no challenge for Jesus.