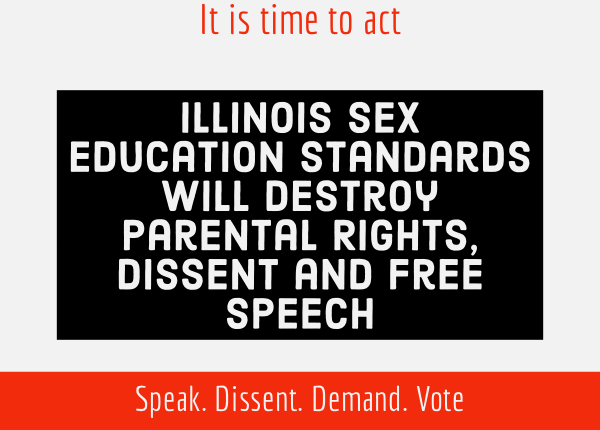 Illinois law (SB0818) mandates that by August 1, 2022, sex education in Illinois public schools must meet the National Sex Education Standards (NSES). I’ve been exploring these standards and I am concerned. Far beyond teaching about the birds and the bees, NSES is implementing a radical social and political agenda that should cause all parents to be gravely concerned.

Starting in second grade and culminating in 12th grade, the NSES seeks to enable students to,

Advocate for school and community policies and programs that promote dignity and respect for people of all sexual orientations, genders, gender expressions, and gender identities.

At first glance this seems benign and some reasonable goals for our kids. If this meant that every student, teacher, and parent should be kind, courteous and respectful to others even in disagreement, then I for one would heartily agree.

Over the past decade we have seen a reawakening on a  number of sexual health issues, including … greater awareness of intersectionality,  and fundamental  connections among sexual orientation and gender  identity and the long-term consequences of stigma and  discrimination. We have also seen the emergence of  new language about social, racial, and reproductive  justice and equity that reflect this reawakening. All of these are reflected in the 2020 National Sex Education  Standards (italics mine).

In other words, these standards are designed to make our children social justice warriors for abortion, critical race theory, intersectionality and unconscious bias. All this is explicitly stated in the document.

Then there is dignity. This term is everywhere in the literature of the LGBT community. In 1997 human dignity meant, “sufficient food, potable water, shelter, sanitation, health services, healthy environment, education, employment and personal security” (E Diczfalusy. Int J Gynaecol Obstet). Now dignity is a highly ambiguous idea that finds its roots in European law and the United Nation’s Human Rights Declaration. While dignity has several aspects, there is one that is profoundly disturbing. William A. Parent, declares, “[D]ignity is to possess the right not to be arbitrarily and therefore unjustly disparaged as a person.”

This new world of dignity has profound implications. Let me take a rabbit trail to prove my point. Abortion rights were rooted in a woman’s right to privacy. A woman’s right to choose was built upon the right of the individual to act without state interference. But a person could tell his daughter, girlfriend, wife or society that he found abortion abhorrent. This is a fundamental right, free speech even when it doesn’t feel respectful. But if being disparaged—to criticize, not respect or not value a person’s choice—is now a moral evil that crushes personal dignity, then parental rights, religious beliefs and free speech are all in peril.

In Canada, in a very public case concerning a female child who wanted to transition, the father believed his daughter needed therapy not medicine. He lost. Further, he was told by the court that he could not publicly speak against his daughter’s transition and he must call her by her preferred pronouns while in public and with her. In a Federalist articlelast year, the father speaks about why he needed to ignore the judge’s order:

he feels a moral responsibility to try to fight the laws and the court rulings which have “destroyed” his daughter. “People need to stand up and realize that [the courts are] sterilizing children, essentially, and mutilating them,” he said. “It’s… state-sponsored child abuse.”

Earlier this year, he was imprisoned for speaking out and calling his unnamed child his daughter. Here’s the kicker: Columbia supreme court justice Michael Tammen said that the father had violated “a publication ban designed to protect the privacy and dignity of a young and vulnerable person”. A father was legally intimidated to act against parental instincts and moral convictions because his daughter’s dignity mattered more.

This new dignity “protection” is now a right in the United States. In Obergefell,, “dignity” is used 30 times and is the cornerstone of Justice Kennedy’s majority opinion: “equal dignity in the eyes of the law.” Jonathan Turley, the Shapiro chair of public interest law at George Washington University, who supports gay marriage, writes,

With the emergence of this new right, we must now determine how it is balanced against other rights and how far it extends…[in 2015], a Montana prosecutor sought to punish speech that exposes religious, racial or other groups “to hatred, contempt, ridicule, degradation, or disgrace.” Such laws could now be justified as protecting the dignity rights of groups and balancing the “danger” of free speech.

NSES is seeking to build a world where parents and detractors must stay silent or else.

NSES explicitly states that only the child can decide his or her gender identity and everyone must accept the declaration because their dignity will be troubled by opposition. Further, this can happen without parental consent or even knowledge because the child’s right to not feel angst supersedes parental involvement. Cammy Bellis, founder of Mothers in Transition, wants to go even further. When kids state that they are a different gender, even young kids and parents disagree, the courts should step in. This is truly the nanny state in action.

The first thing we can do is convey our concerns to health teachers, principals, superintendents, school boards, state representatives and the governor. We don’t want our kids to be used in the political games of Springfield. Nor do we want schools to promote their social agenda. We must demand our kids’ leaders to do something or we will act. Our action will involve cleaning house. It’s time to act before it is too late.