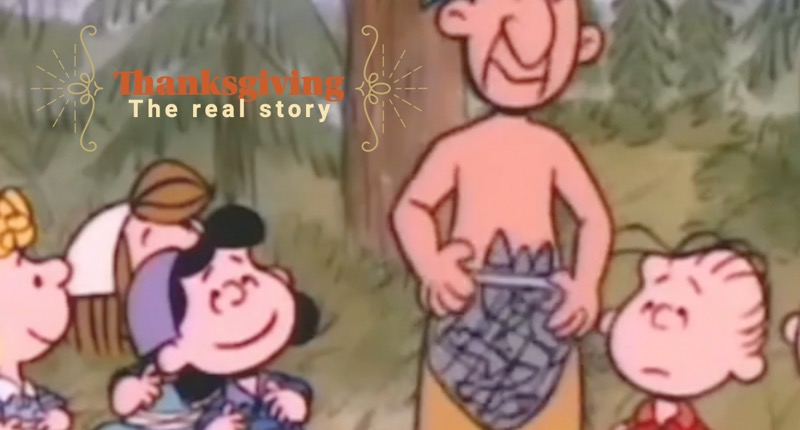 Last night, as we do every year, my family gathered to watch a Charlie Brown’s Thanksgiving special. Since 1988, according to Peanuts producer Lee Mendelson, “two [Charlie Brown] specials [were] tied together” to celebrate Thanksgiving. The first is a fun episode about Charlie Brown dealing with Peppermint Patty, her infatuation with him, friends, and a Thanksgiving party. The second episode, “This is America Charlie Brown”, tells the story of the first pilgrims. We were excited to watch both on AppleTv who is the exclusive streaming service for Charlie Brown. The first we watched but the second is gone, maybe forever.

This loss is a whisper of the loss we have as a country. The historical story of Thanksgiving is being shelved for an attempt to deconstruct the story and retell it as a the beginning of American conquest and colonialism. Yet, none of this is true. This is a true American story worthy of celebration. It is a story that is simple, wholesome, and helped make the United States exceptional, tolerant, and tenacious. Of course, in our history are shadows but there are also bright lights. Both the shadows and light have meaning only in relation to one another. The idea that there is no light, no good history, is as dishonest as forgetting about slavery or the displacement of indigenous peoples.

This is the real story that I would encourage you to share with your kids, your friends and all those you love. The Puritans who left England on the Mayflower were devoted to Jesus Christ. They were radicals and did not like the restraints of the state church of England that regularly sought to silence them. The Puritans loudly resisted and called out the corruption of the church of England and England in general. The result was a country and church that despised them. These are the reasons the first pilgrims set out on the Mayflower. They set out to a new world where they could establish a society founded upon their convictions and their desire to place Jesus at the center of private and public life.

The New World was as physically punishing as the old world was spiritually cruel. Soon after coming ashore, the Puritans were attacked by a group of what William Bradshaw called “Indians”. What became known as “the first encounter” foretold a year of suffering. Within a few months,

half of their company died, being infected with the scurvy and other diseases, which this long voyage and their lack of accommodations had brought upon them; so that two or three died in one day, and out of one hundred and odd persons hardly fifty remained.

The Puritans were nearly destroyed. Along with death and hunger, local tribes robbed and harassed them. Yet like other times in America’s story, providence made a way.

Samoset and Squanto, two tribal leaders who were English speakers and were familiar with England, are arguably the two most important men in the American founding story. In acts of compassion and kindness, they befriended the nearly crushed pilgrims and enabled them to thrive. Together with the Puritans, these two men agreed upon the first treaty of the New World. The treaty protected the Puritans and the tribes these men represented and established a cordial relationship with local tribes. Afterwards, Squanto stayed teaching the pilgrims how to farm, fish and hunt in a wild country that was cruel and unforgiving. He taught them how to thrive in the New World.

Within a year, Squanto had helped the Puritans establish a colony that was self-sufficient and at peace. Isn’t this a great story worthy of celebrating? Can we take a moment and thank God’s providence for brave pilgrims and kind “Indians”? It reveals the best of who we can be. It reveals how strangers made us great. It celebrates how the land was tamed for life. It celebrates friendship and God. For these reasons at harvest time in 1621, the pilgrims celebrated with the Wampanoag people.  Here’s John Bradshaw’s recounting of the day we still celebrate—Thanksgiving:

The husbandry of the first summer had been prosperous on its small scale. The crop of peas failed, but the barley was ‘indifferent good,’ and there was ‘a good increase of Indian corn.’ Fish and game were abundant. By the autumn, seven substantial dwellings had been built. Health was restored. The Governor sent out a party to hunt, that so they might, after a special manner, rejoice together after they had gathered the fruit of their labors.